Ion chromatography (IC) has been a part of the Metrohm portfolio of analytical chemical instrumentation since 1987, and in that span of 33 years, several new and exciting developments have been introduced challenging the limits of what IC can do. From simple setups for academic laboratories, to hyphenated techniques (e.g., IC-ICP-MS) broadening the capabilities of chemical analysis – we’ve done it! Now, I would like to begin to unveil the history of this analytical method at Metrohm and how it has changed over the intervening decades. 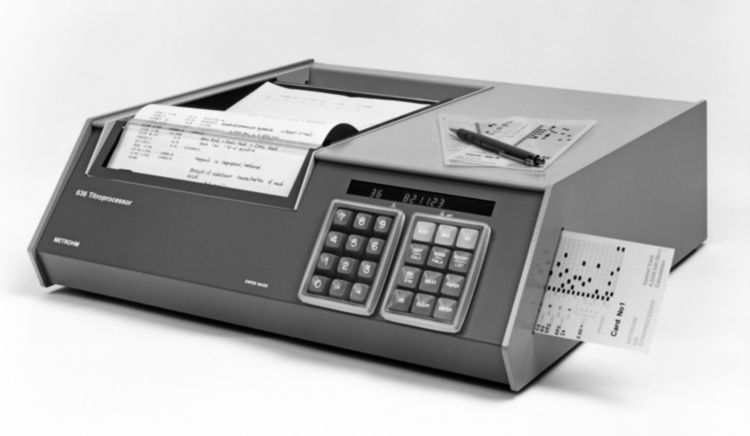 Ion chromatography was added to the Metrohm portfolio in 1987, broadening our span of analytical techniques which at the time only included titration, meters, voltammetry, and the Rancimat. IC, already a couple of years on the market, was seen on one hand as a very interesting method, but on the other hand also as a very complex and expensive technology.

The increasing viability of IC for previously typical titration applications guided Metrohm to focus on this method.

Development of the conductivity detector

You can see how this is measured in the video below. Other detection techniques can be used as well, but are typically applicable only in special cases. 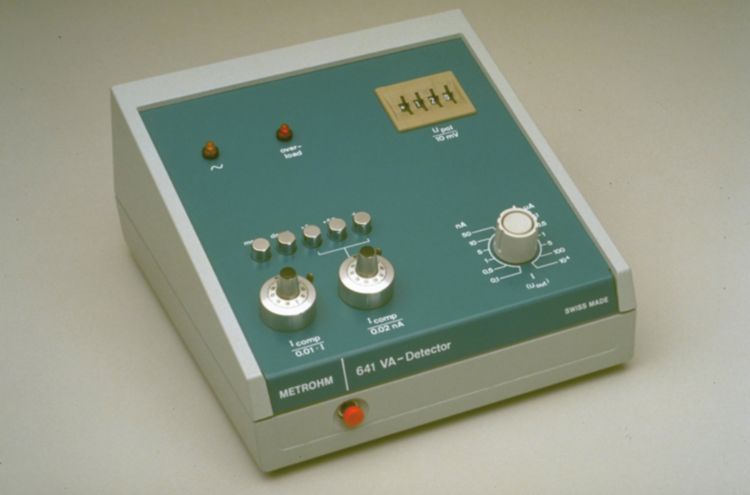 In the early 1980s, the method of IC began to compete for market share with titration. Based on positive experiences with the amperometric detector (641 VA Detector, introduced in 1980, and originally sold as an HPLC detector) and Metrohm’s competence in conductivity measurement, this led to the idea to develop a conductivity detector in a similar manner. A prerequisite for the project was the availability of separation columns (stationary phase) which allowed analysts to reach detection limits of 1 mg/L (or lower) of the standard anions.

In 1984, a test was run on an initial setup consisting of a single-piston HPLC pump, a 6-port injector, commercially available IC separation columns, a conductivity detector, and a chart recorder (586 Labograph). This test proved that the 1 mg/L limit could be reached, and thus the project of developing an official Metrohm conductivity detector began.

At that time, chemical suppression introduced by Small, Stevens, and Baumann [1] was patented and not available. However, non-suppressed conductivity detection described by Gjerde, Schmuckler, and Fritz [2] was seen as a viable alternative. When measurement of low concentrations of ions in solution was necessary, the very small chromatographic peaks plus the high conductivity background from the mobile phase (eluent) created a challenge, and special requirements for the conductivity detector had to be taken into account. The most critical of these was the temperature coefficient of the conductivity, which is typically around 2%/°C. This requires maintaining an extremely stable temperature during the measurement. During the initial development phase it was found that, aside from bulk measurement, platinum was not the best material for electrodes in a flow-through cell. However, stainless steel worked perfectly. The measuring cell still needed to be insulated, however, insulation alone was not sufficient. Active thermostating was required to achieve a temperature stability of better than 0.01 °C. That stability was measured with a thermocouple, and recorded on the Labograph. Later on, with more sophisticated tools the stability was determined to be better than 0.001 °C.

Even after all of this hard work, the initial system baseline stability was still not good enough. As it turned out, several components of the IC system needed to be thermally stabilized. Additionally, the different brand of HPLC pump was not optimal for the development of the Metrohm ion chromatograph.

The first decision was to put the conductivity detector project to the side, and start building an ion chromatograph. Thus, the first Metrohm IC (the 690 Ion Chromatograph) was developed. The 690 IC consisted of: a foam polymer housing for perfect thermal insulation, the electronic and detector block, as well as a pulse dampener, a sample injector, and separation column. All capillary connections consisted of HPLC capillaries at the time (made from stainless steel). The inadequate HPLC pump was replaced and upgraded with a Metrohm IC Pump, and the Labograph was almost immediately followed by an integrator, which completed the IC system.

Despite the general consensus in the 1980s that ion chromatography was only robust while using metal-free instruments, Metrohm was able to run anion, cation, and ion-exclusion chromatography on stainless steel-based systems. Even determinations of heavy metals were performed without issues. 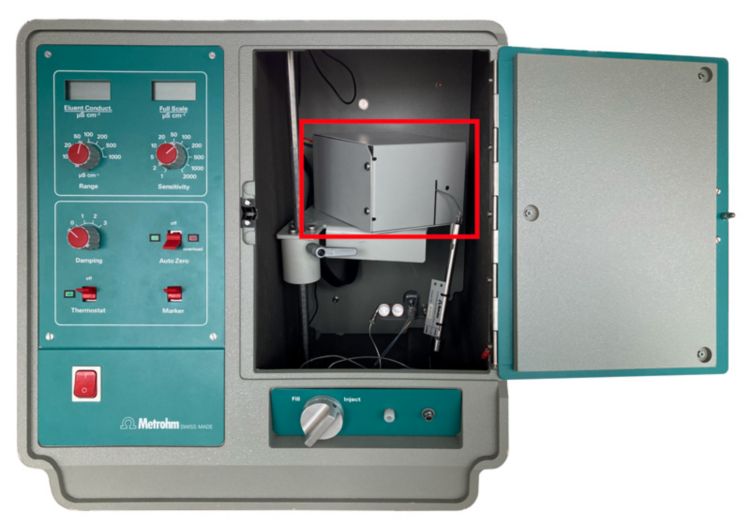 Internal view of the Metrohm 690 IC. The conductivity detector is highlighted.

A drawback of non-suppressed IC is the relatively high inherent baseline noise due to high conductivity levels from the mobile phase. Parameters which add to this baseline noise include temperature-induced fluctuations, pump noise, and electronic noise.

The temperature influence on baseline noise was minimized thanks to the near perfect thermal stabilization of the detector. The quality of the high pressure pump is important to stabilize the baseline, however, under standard running conditions it does not add much to the baseline noise. Finally, after optimizing these points, it was clear that the electronic noise was the most important parameter on which to focus. Each electronic component influences temperature fluctuations and also adds some amount of noise.

The thermostated detector block consisted of an aluminum block for thermostating, a built-in measuring cell, and an electronic preamplifier. This preamplifier guaranteed that the measured analog conductivity signal was insensitive to external fields when guided to the main electronics. 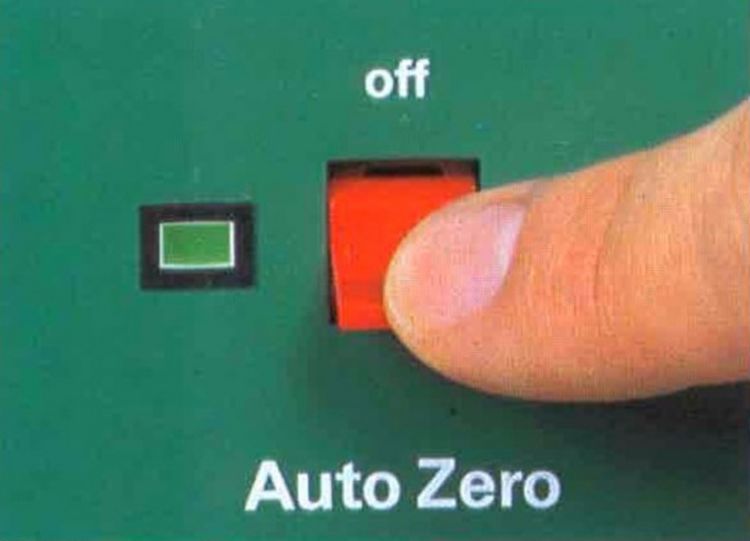 The Auto Zero function measured the actual conductivity at initialization of the function and was subtracted from the signal throughout the chromatogram. This can be called background compensation. The «electronic suppression» designation is given due to an electronic setup which additionally reduced the electronic noise.

The idea behind this is as simple as it was effective. The electronics were set to measure the actual conductivity signal as well as the measured background conductivity through two parallel paths with identical electronic components. Subtraction of the two signals was done just prior to the output to the external A/D converter. Under an assumption that the same components should add the same noise and exhibit similar thermal behavior, both signals are influenced in the same manner. Therefore, the noise level was minimized even further.

Additionally, the apparent noise level was improved using the optimal output window (called «Full-scale») in units of µS/cm. The free Application Note below describes this effect.

At that time, this noise level of approximately 2 nS/cm was similar to or better than analyses performed with chemical suppression.

At market launch in late 1987, Metrohm offered a total of six IC separation columns: two suitable for anions, one for monovalent cations, one for divalent cations, and one for organic acids (ion-exclusion). At that time, the group of Prof. Dr. Schomburg (Institut für Kohlenforschung, Mühlheim/Ruhr, DE) studied the preparation of HPLC phases by coating polymer materials on to e.g., silica. One of the phases used was poly(butadiene/maleic acid) on a silica material, which was found to be able to separate mono- and divalent cations in a single isocratic run. Metrohm acquired the technology and started column production in Herisau, Switzerland.

The so-called «Schomburg column» or later «Super-Sep Cation column» was the very first column on the market allowing the simultaneous separation of alkali and alkaline earth metal cations. Even the current Metrosep C 4 and Metrosep C 6 columns’ roots date back to the Schomburg column. 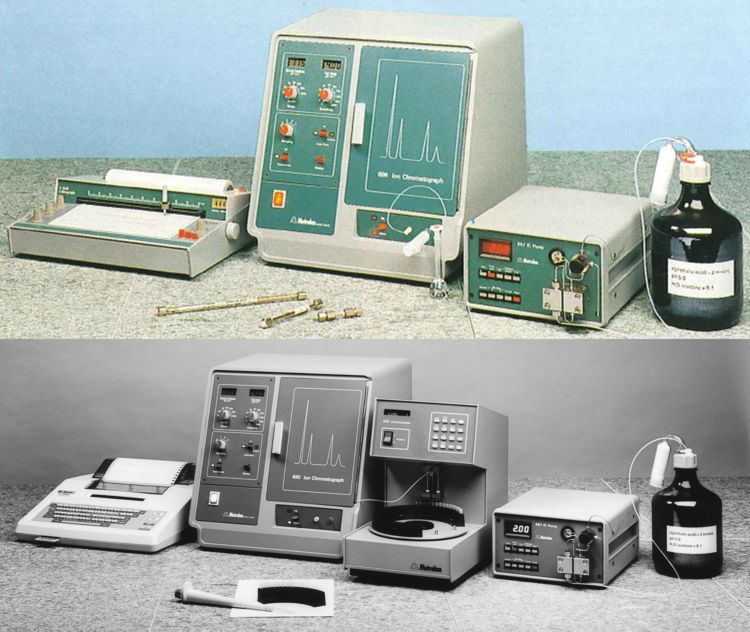 In the first months on the market, only the Labograph (a chart recorder) was available for the new IC. This was of course not really acceptable. Nevertheless, results achieved by cutting out and physically weighing the peaks were quite correct. The first integrator (Shimadzu C-R5A) was a tabletop integrator with LCD display (two lines), storage capabilities (two chromatograms in the instrument, and five chromatograms per external card), and a thermo-printer for documentation. The 690 IC featuring the 714 IC-Metrodata, ushering scientists into a new era of peak integration possibilities.

The next installment in this series covers the 1990's and early 2000's. During this time, Metrohm developed modular IC, the Metrohm Suppressor Module (MSM), as well as some outstanding separation columns.