In the last part of our series of articles about trace metal analysis using solid-state electrodes, we will have a look at the glassy carbon rotating disc electrode (GC RDE) and its application possibilities.

A rotating disc electrode (RDE) consists of two parts: the electrode tip which is made available in different materials, and a driving axle. The electrode tip is simply screwed onto the axle (Figure 1) to assemble the complete working electrode. Figure 1. The two parts which make up the RDE. Left: driving axle for RDE. Right: glassy carbon electrode tip, with shaft made of glass.

Glassy carbon (GC) has a long history as solid electrode material for trace metal analysis. In general, GC is carbon with an amorphous structure which is similar to glass or ceramics, but different from graphite or diamond which both have a crystalline structure.

Aside from properties including a high temperature stability and a hardness similar to quartz, glassy carbon is very chemically inert and has a low electrical resistance, making it a versatile electrode material.

In the Metrohm GC electrode tip (Figure 1), the glassy carbon rod is fused within a glass shaft—another inert material. This design creates an electrode tip that is inert against most chemicals and solvents and guarantees measurements with excellent reproducibility due to the seamless intersection between the electrode material and glass shaft. 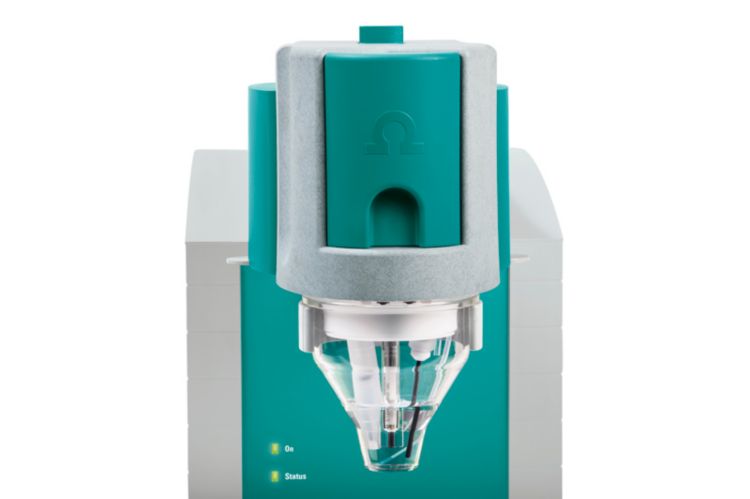 Modification with a metal film

For trace metal applications, the GC electrode is modified with a metal film, usually mercury or bismuth. The film is plated ex situ from an acid plating solution which contains about 20 mg/L Hg2+ or Bi3+. Such a solution can easily be prepared from commercially available metal standard solutions and can be used for the plating of several films.

Once the film is deposited on the glassy carbon electrode, multiple determinations can be carried out with the same film. When the performance deteriorates, the exhausted film is simply wiped off and a fresh film is plated. Since only the renewable film is affected by aging processes, the GC electrode itself can be used for a very long time.

The risk of cadmium and lead poisoning from drinking water and the significance of the determination of these two elements has already been discussed in previous posts in this series. To monitor the guideline values of 3 µg/L for cadmium and 10 µg/L for lead, recommended by the WHO (World Health Organization), a detection limit of β(Cd) = 0.3 µg/L and β(Pb) = 1 µg/L would be sufficient. 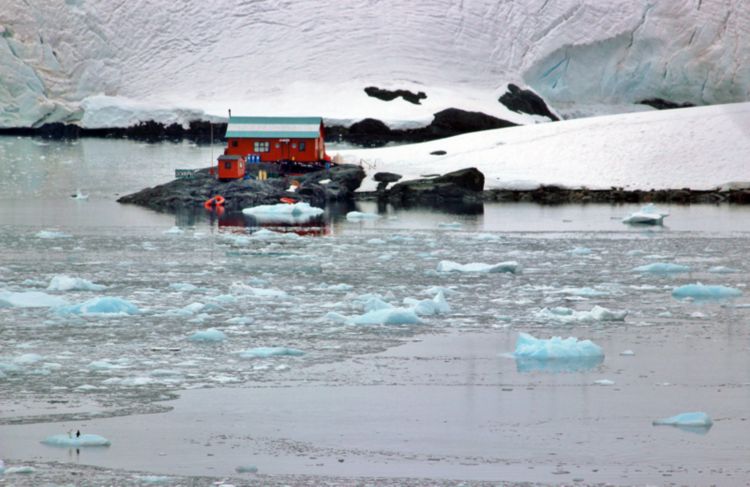 With the glassy carbon electrode the determination is far more sensitive, featuring a ten-fold improvement on the limit of detection of β(Cd) = 0.02 µg/L and β(Pb) = 0.05 µg/L with a deposition time of 30 s. This limit can be lowered even more with an increased deposition time.

For this extremely sensitive determination, a mercury film is plated on the glassy carbon electrode. The determination of cadmium and lead is carried out by anodic stripping voltammetry (ASV).

The very low detection limit makes this application especially interesting when it is not only required to monitor limit values but to actually detect concentrations in the ppt (parts per trillion, ng/L) range, for example in environmental analysis such as seawater research.

Another application with very low detection limits using the GC electrode is the determination of nickel and cobalt. This electrode allows the detection of concentrations down to β(Ni) = 0.05 µg/L and β(Co) = 0.03 µg/L. For this application, the electrode is modified with a bismuth film. The determination of nickel and cobalt is carried out by adsorptive stripping voltammetry (AdSV) using the complexing agent DMG (dimethylglyoxime). 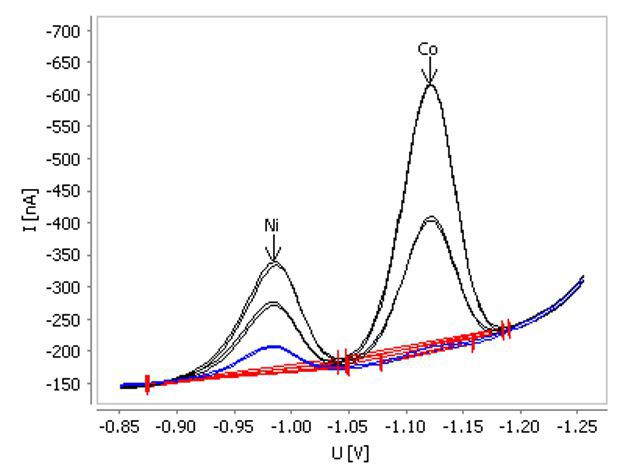 For decades, this method was successfully executed with the mercury drop electrode. The use of a bismuth film on a glassy carbon electrode offers a non-toxic alternative with a similar sensitivity as the established method. Besides the high sensitivity, this application also shows excellent repeatability.

20 consecutive determinations of β(Ni) = 0.5 µg/L and β(Co) = 0.5 µg/L, carried out on the same bismuth film, showed an average recovery of 105% for nickel, with a relative standard deviation (RSD) of 2.0%. The recovery for cobalt was 112% with a RSD of 3.3%. This makes this method a viable tool in environmental analysis when natural background concentrations, which are often in the ppt (ng/L) range, should be investigated.

More details can be found in our free Application Note below.

Legal limits for chromium are relatively high. For example, the guideline value of the World Health Organization (WHO) is 50 µg/L for drinking water. These values usually refer to the total chromium concentration, but there are significant differences in toxicity between Cr(III) and Cr(VI). Even miniscule doses of Cr(VI) are toxic as well as carcinogenic.

Since the beginning of this century, there have been ongoing discussions in the scientific community about whether an additional limit value only for Cr(VI) is required, and what this value should be.

Measuring techniques are needed which allow the determination of Cr(VI) in the ng/L range. Using the glassy carbon electrode modified with a mercury film it is possible to detect Cr(VI) concentrations down to 0.05 µg/L. Cr(VI) is determined by adsorptive stripping voltammetry (AdSV) with DTPA (diethylenetriaminepentaacetic acid) as complexing agent. The recovery of a concentration of β(Cr(VI)) = 0.1 µg/L is 111% with a relative standard deviation of 4.4% (triplicate determination).

Learn more about this analysis by downloading the following Application Note:

All of the above-mentioned applications can be carried out manually with the 884 Professional VA system from Metrohm (Figure 4), but it is also possible to run small sample series with an automated setup.

This was the last post in our five-part series on heavy metal analysis with solid state electrodes. If this or one of the previous posts sparked your interest in one of the applications, do not hesitate to contact your local Metrohm representative.

For a complete overview of the different applications that can be performed with the SSEs exhibited in this series, check out the table below. Click on each application note or bulletin for a free download!

Other installments in this series

This blog article was dedicated to the topic of the glassy carbon rotating disc electrode (GC RDE) and how it can be used for for the determination of heavy metal ions in drinking water and the environment. Other installments are dedicated to trace metal analysis with these solid-state electrodes: