The return to atomism and the rise of modern chemistry 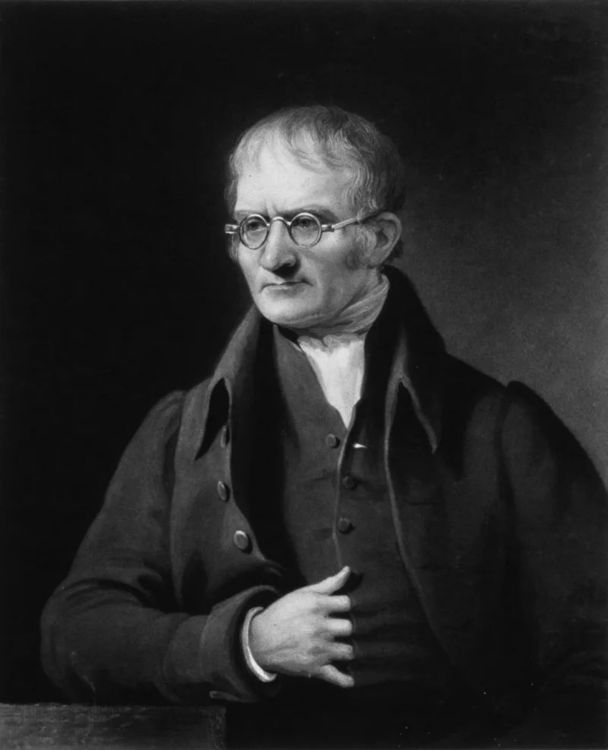 In 1808, John Dalton (1766–1844) published his book entitled «A New System of Chemical Philosophy» – a work which marked the birth of modern chemistry. In his theories, Dalton took up Democritus’ conception of atomism. He postulated that atoms were the smallest constituents of matter, and that they could not be divided further, nor created or destroyed in chemical reactions. According to Dalton, all atoms of the same element are identical, but differ from the atoms of other elements. In chemical reactions, atoms combine to form compounds, are separated from one another, or are rearranged relative to other atoms. Because atoms are indivisible according to this model, and therefore only whole atoms can react with one another, Dalton concluded that the elements in a compound are always present in whole-number ratios. 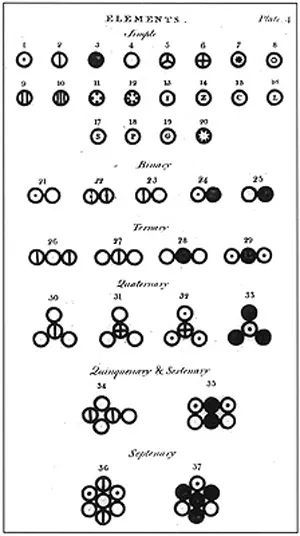 In his atomic theory, Dalton made many hypotheses which have been pivotal to our understanding of chemistry even up to the present day. Some of the premises of his theory are not yet conclusive. For example, Dalton believed that an atom of one element only reacts with exactly one atom of another element. He only deviated from this hypothesis in cases where experimental observations made it absolutely necessary. For instance, he therefore theorized that the composition of water was H-O, meaning that he made subsequent errors, particularly when determining relative atomic masses.

Nevertheless, his atomic theory put chemistry firmly on the right track. From this point onwards, scientific discoveries in chemistry became much more frequent.

From the volume of gases to atomic and molecular masses 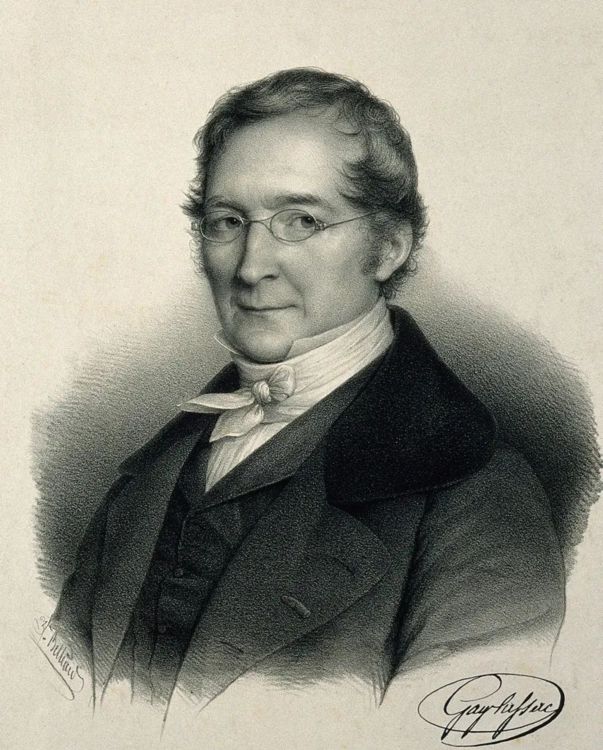 In the same year, Joseph Louis Gay-Lussac (1778–1850) established that the volume ratio of gases reacting with one another and their reaction products is always a whole number. For example, Gay-Lussac found that two volumes of hydrogen and one volume of oxygen would react to form water (H2O), and that this gaseous water would in turn occupy two volumes. 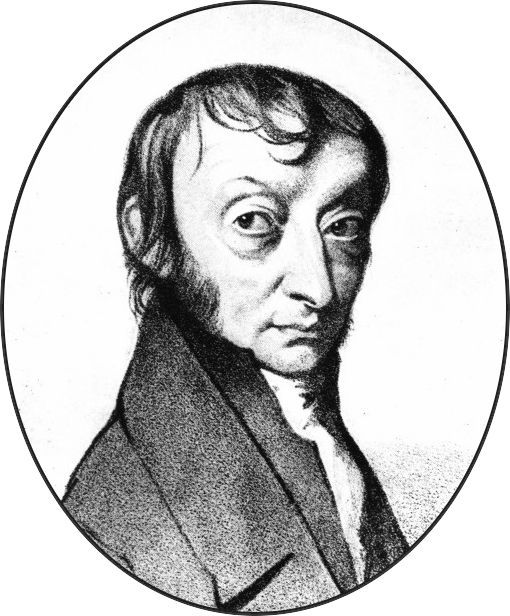 In 1811, Amedeo Avogadro (1776–1856) then formulated the hypothesis that equal volumes of gas would contain equal numbers of particles, regardless of the substance in question. Avogadro’s hypothesis, however, was not yet widely accepted. 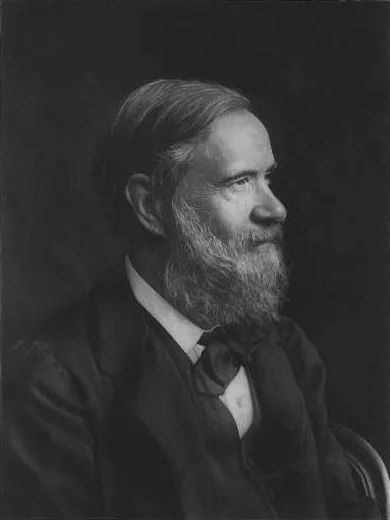 It was only in 1860 that his student Stanislao Cannizzaro (1826–1910) managed to convince the scientific community of its validity, after which the hypothesis became known as «Avogadro’s law». This made it possible to determine the molar masses of numerous atoms and molecules, thereby paving the way for progress in chemistry. 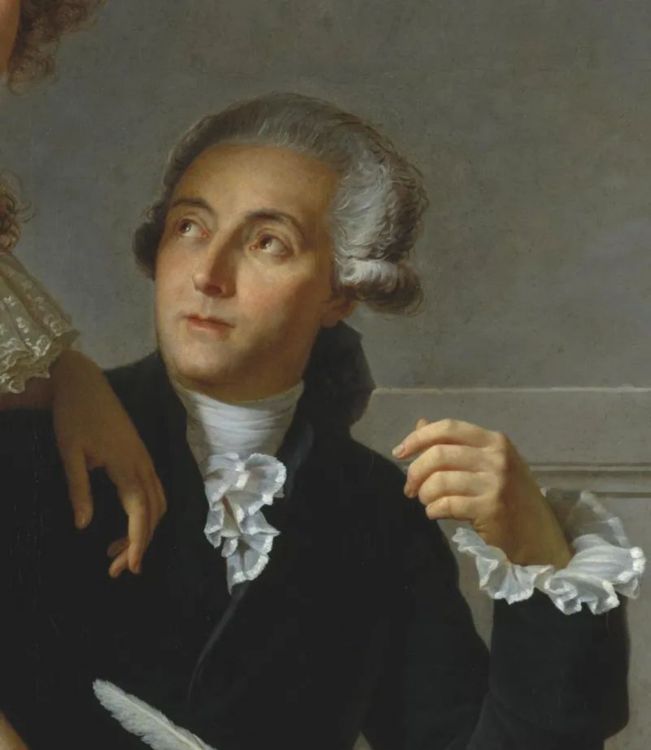 Gay-Lussac bore witness not just to the chemical revolution, but also to the French Revolution, which raged on during his youth in his home country. His father, a wealthy lawyer and prosecutor, was imprisoned and his tutor fled. The French chemist Antoine Laurent de Lavoisier (1743–1794), who in the late 18th century developed the first systematic nomenclature and a standardized terminology for chemistry, was guillotined.

Gay-Lussac, however, benefited from the new order when he was selected to attend the École Polytechnique, an institution of the Revolution. There, his mentors included such high-caliber scientists as the mathematician Pierre Simon de Laplace.

The late development of atomic theory by Dalton might suggest that a chemical industry could only come to fruition in the 19th and 20th centuries. On the contrary, chemical processes had already been used on an industrial scale since the middle of the 18th century. Despite there not being much in terms of a theoretical understanding of chemistry at the time, the experimental findings of the alchemists made numerous practical applications possible, both in the production and analysis of chemicals. Systematic development and optimization of processes, especially for industry, was nonetheless impossible because of this lack of basic knowledge. As a result, the chemical factories of the 18th century rather resembled enlarged laboratories than the factories we know of today.

The first chemical process that was applied on an industrial scale was the lead chamber process for the production of sulfuric acid. The process had been known since the Middle Ages and had been applied on a large scale in England since 1746. Another important process from the late 18th century onwards was the Leblanc process for the production of soda ash (sodium carbonate), which was required in the textile industry for bleaching linen and was also used in the soap, glass, and paper production industries. Nicolas Leblanc (1742–1806) developed the process in 1791 in a competition run by the French Academy of Sciences, which was desperate to find this kind of process in order to gain independence from expensive imports of natural soda. The Leblanc process became the method of choice for producing sodium carbonate, until the Solvay process was ready for mass production in 1880. However, Leblanc never received his prize money. When it became due, the nation was in the throes of the Revolution, and the Academy was abolished by the French National Convention.

Soda and sulfuric acid are still among the most important products of the chemical industry.

Analytics in the burgeoning chemical industry

In addition to soda and sulfuric acid, the most important products of the chemical industry in the 18th century were hydrochloric acid for chlorine production and chlorine water. All of these products were needed by other industries. For example, one of the applications of soda was in soap production, while chlorine was used for bleaching textiles. Since the purity of chemicals was crucial in the processing industries, they soon developed methods for quality control. Volumetric methods were developed to enable fast, qualitative tests of raw materials: a reagent, which is known to react with the substance being determined, is added to the chemical. The endpoint of the reaction is made visible using a suitable method. In the final step, the quantity of reagent consumed is determined. If an empirically confirmed quantity of reagent was consumed, the chemical was deemed to be suitable. However, quantitative determinations were not yet possible with this rudimentary precursor of titration.

By the end of the 18th century, acid-base titrations, precipitation titrations, and redox titrations were described in the literature. In the early 19th century, Joseph Louis Gay-Lussac, who is often considered to have invented titration, developed new titrimetric analysis methods and made titration easier, faster, and more precise. The developments achieved in the field of titration were almost invariably made in France, where the majority of scientists were employed by the state after the Revolution and were tasked with solving industrial problems that were relevant to the nation. A synthesis of science and industry, as France had demonstrated, was soon to follow throughout the rest of Europe.

The rapid development into modern chemistry continued into the 19th century: organic chemistry was born and opened the door for chemistry not just for emulation, but the direct manipulation of nature, for example by using medicines and fertilizers.

Learn about this and more in Parts 3 and 4 of the series. Click the link below to go directly to the next post!

A History of Chemistry - Part 3 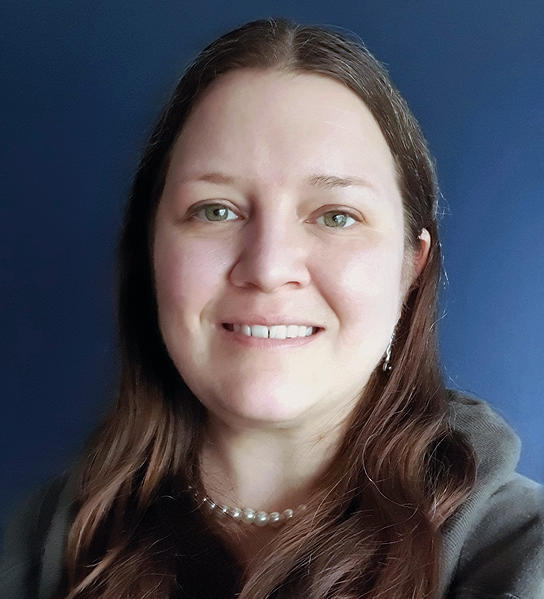