Over the years, dispersive Raman spectroscopy has increasingly been implemented for sample analysis including material identification, biomedical research, and art and archeology due to its portability and sampling flexibility. When choosing a Raman instrument, one of the primary concerns is the wavelength of the laser that is integrated into the Raman spectrometer system. The Raman signature and the specific peak position of any material is related to the material’s unique chemical structure and is independent of the excitation wavelength, so the molecular fingerprint will be the same regardless of the excitation laser wavelength. However, different excitation wavelengths provide specific strengths and weaknesses allowing a user to optimize the measurement of different samples by their choice of Raman excitation laser wavelength. So how does one select a laser excitation wavelength for particular applications? There are many different excitation options, but the three most widely used are 532 nm, 785 nm and 1064 nm. The most popular is the 785 nm excitation system as it offers the best balance of signal strength, sensitivity to fluorescence, cost and overall performance, and can be used to collect the Raman spectrum of most organic materials quickly. When samples are fluorescent in the other wavelengths, the longer wavelength of 1064 nm is beneficial.

Some important indicators of performance for these three wavelengths are listed below:

The most obvious difference is the excitation efficiency. Raman scattering efficiency is proportional to λ-4, where λ is the laser wavelength. For example, Raman scattering at 532 nm is a factor of 4.7 more efficient than at 785 nm and 16 times better than at 1064 nm, effectively meaning that scan time at longer wavelengths needs to be much longer compared scan time to collect the spectrum using 532 nm, assuming that all other conditions remain the same.

Detector sensitivity is another concern. Since Stokes Raman is used for most instruments, Raman signals excited by a 532 nm laser are distributed in the visible range, where the response is best for most silicon-based CCD detectors. Meanwhile, Raman signals from 785 nm systems fall within the NIR range (750-1050 nm), where the response is still relatively good. For 1064 nm, however, since there is no response from silicon above 1100 nm, NIR-sensitive InGaAs array detectors are normally used for dispersive instruments. Further, a 512 pixel sensor is embedded for most dispersive 1064 nm Raman instruments (vs. 2048 for most others) due to cost control concerns, which leads to relatively less detector pixel resolution and potentially smaller Raman shift coverage.

Another important phenomenon that occurs and interferes with the measurement of the Raman spectrum is fluorescence, which in most cases is a decisive factor when excitation efficiency is very important. Fluorescence is produced in a very similar process to Raman scattering but is based on photoluminescence mechanism. The Raman peaks maintain a constant separation from the excitation frequency; meanwhile, fluorescence is anchored at a specific frequency or wavelength, meaning that it does not shift with the excitation laser. Furthermore, the fluorescence bleaching effect makes the fluorescence signals drop over time. To minimize interference of fluorescence with a Raman spectrum, longer wavelength laser excitation is preferred. Fluorescence may be strong when measuring darker samples, dyes, and natural products.

Figure 1. Energy diagram for fluorescence and lasers of different wavelength used across the fluorescence spectral range.

Laser energy absorption by samples must also be taken into consideration as this may cause sample heating and lead to changes in the sample. Generally, the longer the excitation wavelength, the more the sample absorbs light and is heated. In extreme cases, small volume liquid samples may be boiled, while colored, dark, or black samples may be damaged. Laser energy absorption-related sample damage may be avoided or minimized, by rotating the sample, or lowering the laser power density at the sample, but these steps add complexity and/or increase the measurement time. Therefore, with certain incorrect measurement configurations, it is possible for sample damage to take occur due to improper handling even though Raman is a nondestructive technology.

Other factors, such as the resonance Raman effect, should also be taken into consideration when choosing a wavelength.

Below, we show some sample spectra that exhibit the different performance of various excitations. It must be noted that there are many materials that can be scanned using any wavelength without a problem. In the example, it is shown that the Raman spectrum of toluene can be measured readily using all three standard excitation lasers. 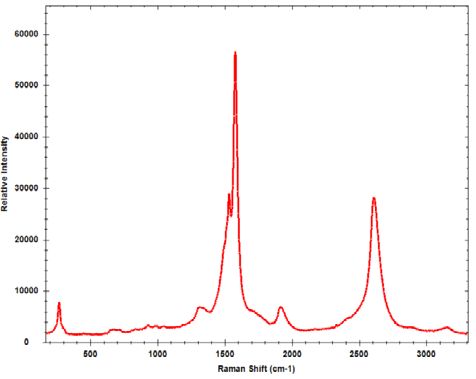 The 532 nm laser excitation provides good sensitivity and is commonly used for carbon nanotube analysis, where the sample may burn at 785 nm. Of course, there is the option of lowering the laser power for the higher wavelength, but this will result in a lower SNR. The 532 nm excitation is also recommended for metal oxides or minerals and inorganic materials in general. The 532 nm instrument also has the benefit of covering the full range from 65 cm-1 to 4000 cm-1, which may be an important consideration for certain applications where there are distinct signals in the higher Raman shift region, including the –NH and –OH functional groups between 2800 and 3700 cm-1.

The 785 nm wavelength excitation is the most popular and common wavelength in use, as it performs efficiently for over 90% of Raman active materials with limited interference from fluorescence. Depending on the sample and the strength of the corresponding Raman signal, a single scan acquisition may take anywhere from one second to several minutes. Between the 3 standard wavelengths, the balance of fluorescence reduction and spectral resolution makes the 785 nm the most popular choice. 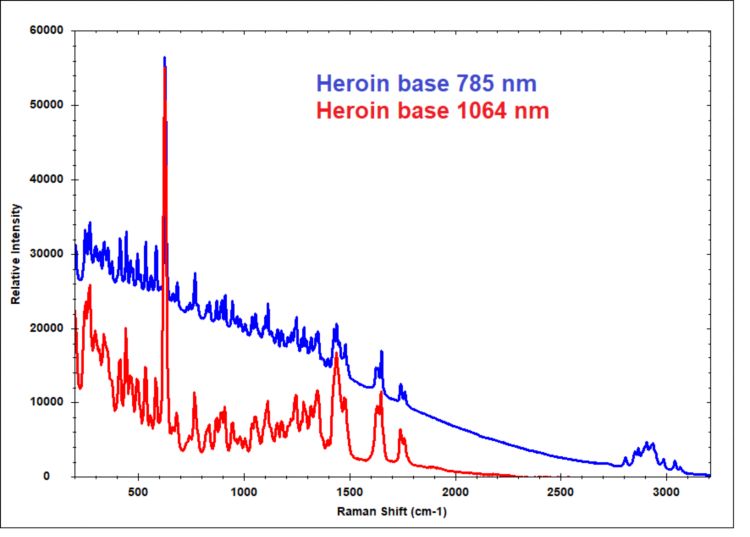 Figure 4. Raman spectra of heroin collected with 785 nm and 1064 nm excitation, showing that fluorescence is mitigated when using the longer wavelength.

In the spectra at left of heroin base scanned using 785 nm and 1064 nm excitation, the 785 nm spectrum displays more detail because of better resolution, but does have a sloping baseline due to fluorescence. It was also acquired using a much shorter integration time than the 1064 nm, 10 sec vs. high tens of seconds.

In most cases, 1064 nm laser excitation is chosen to minimize fluorescence.

For example, the Raman spectrum of sesame seed oil, a dark liquid, can be measured at 1064 nm excitation, but the Raman features in the spectra collected from 532 nm and 785 nm are masked by strong fluorescence.

Figure 5. Raman spectra of sesame oil, overwhelmed by fluorescence when measured with 532 and 785 nm excitation, and with clearly evident Raman peaks at 1064 nm excitation.

Although there have been concerns in the past about fluorescence in cellulose, a good spectrum can be collected using 785 nm and 1064 nm, with lower background contribution using 1064 nm. Fluorescence is detrimental for measuring the Raman spectrum of cellulose only when measured using 532 nm.