Paraquat is a highly effective herbicide used to manage weeds in agricultural operations. It is also exceptionally toxic, causing debilitating health effects that can result in delayed death after exposure. In China alone, it is estimated that over 5000 deaths each year are attributed to exposure during application and production of paraquat. In recognition of paraquat’s danger, the EU and several other countries have banned its use for any application. The US EPA permits limited use of paraquat by licensed applicators. Despite tight regulation, paraquat continues to be produced and is liberally used as an herbicide in over 100 countries without regulatory oversight.

This application note describes a simple procedure for trace detection of paraquat on tea leaves, based on the acquisition of SERS spectra of paraquat in chloroform extracts using Misa and gold nanoparticles (Au NPs).

To establish a reference spectrum, pure paraquat standard at a concentration of 1 μg/g in water was analyzed using Au NPs. The unique SERS spectrum shown in Figure 1 can be used to create a library entry for paraquat. 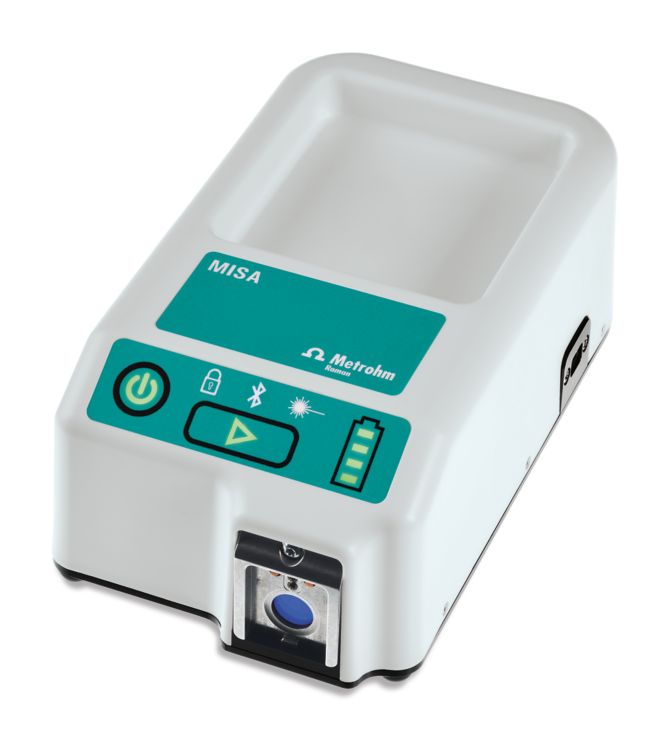 Serial dilutions of paraquat in water were added to 0.1 g aliquots of finely ground tea in glass vials to yield a concentration range of spiked test samples: 50, 25, 10, 5, and 1 μg/g, 100 and 50 ng/g. These samples were dried at 80 °C, and 1 mL of chloroform was added each vial. Each sample was shaken for thorough wetting of the ground tea leaves and rested for 15 minutes to facilitate settling and extraction. After waiting the required time, 10 μL of chloroform extract was decanted to a fresh vial, dried briefly, and resuspended in 450 μL of Au NPs and 50 μL of 0.5 mol/L NaCl. Sample vials were gently shaken and immediately placed into the vial attachment on Misa for measurement.

Figure 2. SERS spectra for a concentration range of paraquat in tea.

Detection of paraquat in the field

If tea leaves are very large, then grind, crush, or chop them. Using the large end of the scoop, add 3–4 scoops of sample to a 2 mL vial. Add chloroform to the vial until halfway full. Cap and shake the vial gently to mix, then let sample rest for 15 minutes. Fill a clean vial ~1/2 full with Au NPs. Using a pipette, add 2 drops of chloroform extract to a clean vial and remove the solvent with evaporative heating. Fill this vial halfway full with Au NP solution, add 1 drop of NaCl solution, and shake gently to mix. Insert into vial attachment on Misa for measurement.

The level of detection reported here for paraquat on tea leaves is significantly lower than the permissible levels of residue allowed for most vegetable, herb, and fruit crops. Sampling with Misa is simplified with onboard operating procedures that automate acquisition parameters, sample processing, and results reporting. Misa’s dedicated software, Misa Cal, can be used for spectral processing, library matches, and results sharing.