Auramine O (AO) is an industrial dye used for a broad range of manufactured products and as a fluorescent stain for detecting acid-fast bacteria in clinical specimens. Due to its intense yellow coloration, AO is also prized as an additive for enhancing the visual appeal of illicitly processed food products. Curry powder is a likely target for such adulteration, as it is a bright yellow mixture of several spices. Health hazards associated with ingestion, and even improper handling of AO, include a high risk of several cancers, neural and liver toxicity, and even death. Despite bans on AO as a food additive, surveillance testing indicates its persistent use as an adulterant in foods and spices.

Misa is a versatile tool for the rapid and accurate detection of banned food colorants. This application note details a facile extraction procedure for detecting AO in adulterated curry powder. 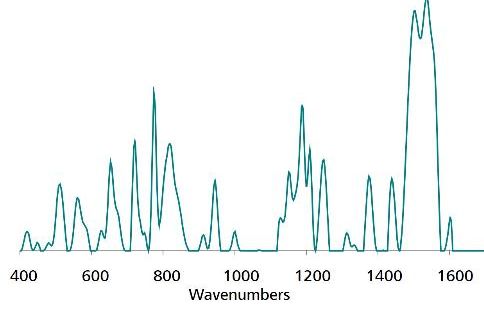 To establish a reference spectrum for AO, a pure standard in alkaline water (100 μg/mL, pH 13) was analyzed using gold nanoparticles (Au NPs). The unique SERS spectrum shown in Figure 1 can be used to create a library entry for AO. 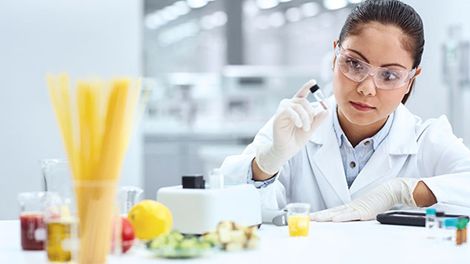 In a simulated test for AO in curry powder, solid AO was mixed with purchased curry powder to yield a concentration range of spiked test samples: 1000, 100, 10, 5, and 1 μg/g. Liquid extraction of AO was performed by adding 1 mL of 0.1 mol/L NaOH to 100 mg of sample in a glass vial. This slurry was mixed and allowed to rest for 2 minutes. Ethyl acetate (EA, 1 mL) and NaCl (100 mg) were added to the vial, which was then inverted gently a few times (do not shake vigorously) to promote extraction of AO into the EA layer. After 10 minutes, 50 μL of the top EA layer was added to a vial containing 400 μL of Au NPs and 50 μL of 0.5 mol/L NaCl. The vial was shaken to mix and immediately placed in the vial attachment  on Misa for measurement.

Figure 2. Detection range of AO with Misa and Au NPs.

Detection of Auramine O in the field

Using the large end of the scoop, add 3–4 scoops of sample to a 2 mL vial. Add NaOH solution to the vial until halfway full. Add 3–4 scoops solid NaCl, then fill vial to the top with ethyl acetate. Cap and invert the vial a few times to mix, but do not shake the vial vigorously. Let the sample rest for 5 minutes, as distinct layers will form. Fill a clean vial halfway full with Au NPs. Using pipettes, add 2 drops each of the top layer of the sample solution and NaCl solution to Au NPs, cap and shake the vial gently to mix. Insert into vial attachment on Misa for measurement.