The illicit addition of melamine to milk due to its apparent enhancement of protein content in foods attracted worldwide attention in 2008. It was discovered at this time that melamine was being deliberately added to raw milk at collecting stations in rural China. Thousands of young children and infants that consumed formula produced from melamine-tainted milk experienced kidney damage and death. As a result, both daily intake limits and increased monitoring of melamine in dairy products were established globally. 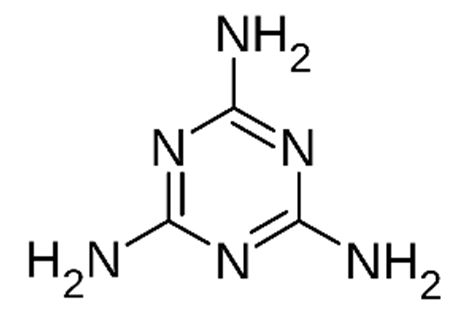 Melamine is used in the production of industrial materials such as kitchenware, building materials, paints, and paper products.

Melamine’s high nitrogen content can enhance the apparent protein content of animal feed and foods for human consumption, notably in dairy products. Unfortunately, this provides motivation for food adulteration for enhanced profits at the expense of human health.

Light cream bought from a local grocery was spiked with melamine and tested directly to simulate an authentic scenario of a tainted dairy product. A stock solution of melamine dissolved in methanol was added to light cream to yield samples ranging from 1–500 μg/mL melamine concentration.

10 μL of each sample was pipetted directly onto Ag P-SERS strips, dried briefly, and inserted into the P-SERS attachment on Misa for analysis.

The overlaid spectra in Figure 3 demonstrate reliable detection of melamine in light cream with Ag P-SERS down to 5 μg/mL, based on the most prominent peak of melamine at 685 cm-1.

Detection of melamine in the field

Using a pipette, add 1 drop of raw dairy product onto the colored portion of a Silver P-SERS strip. Insert into P-SERS attachment on Misa for measurement.

The detection of melamine in a distinctly challenging dairy product matrix has been demonstrated using Misa Ag P-SERS substrates.