N,N-Dimethyltryptamine (DMT) is a naturally occurring [1] potent hallucinogenic compound used in traditional religious ceremonies of indigenous Central and South American cultures [2]. Modern recreational use of DMT is growing and although it is legally protected in some countries, new legislation attempts to reduce its abuse and associated adverse health effects. However, laws that address plant material containing DMT differ in neighboring countries, making enforcement of such legislation difficult. In the United States, for instance, DMT is a Schedule 1 drug, but the cultivation of trees and other plants known to contain high levels of the easily extracted compound (as much as 3.8 mg/g or 0.38% dried plant weight [3], with a typical dose of 0.48 mg/kg body weight [4]) is permitted.

Illicit synthesis and large-scale distribution of DMT-enriched plant material is rising and must be regulated. As of March in fiscal year 2022, the U.S. Customs and Border Protection Officers (CBPOs) in Memphis, Tennessee had already seized over 635 pounds (288 kg) of DMT [5]. The ideal test for detection is robust, field-based, and can quickly and easily identify DMT in plant materials. MIRA XTR DS from Metrohm Raman provides rapid and sensitive detection of DMT in a limited resource setting using spiked plant bark as the test material. 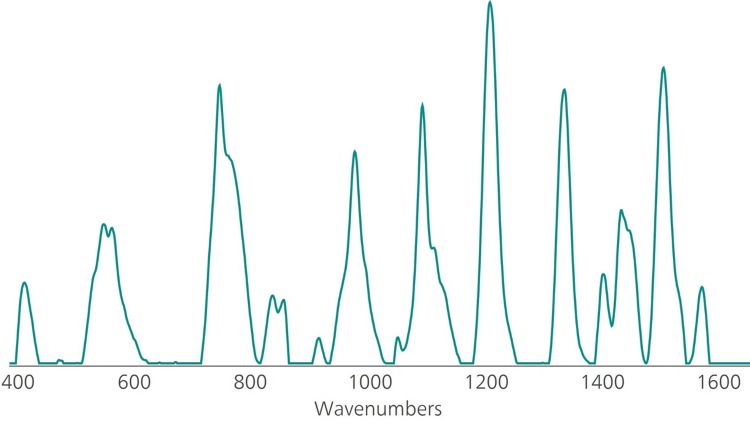 A SERS reference spectrum for DMT (Cayman Chemicals) was prepared using a solution of 1 mg/mL DMT in methanol mixed with Au NPs. The SERS spectrum (Figure 1) contains several highly resolved peaks which permit unambiguous identification of DMT. This spectrum can be used to create a DMT library entry that can be matched against test samples. 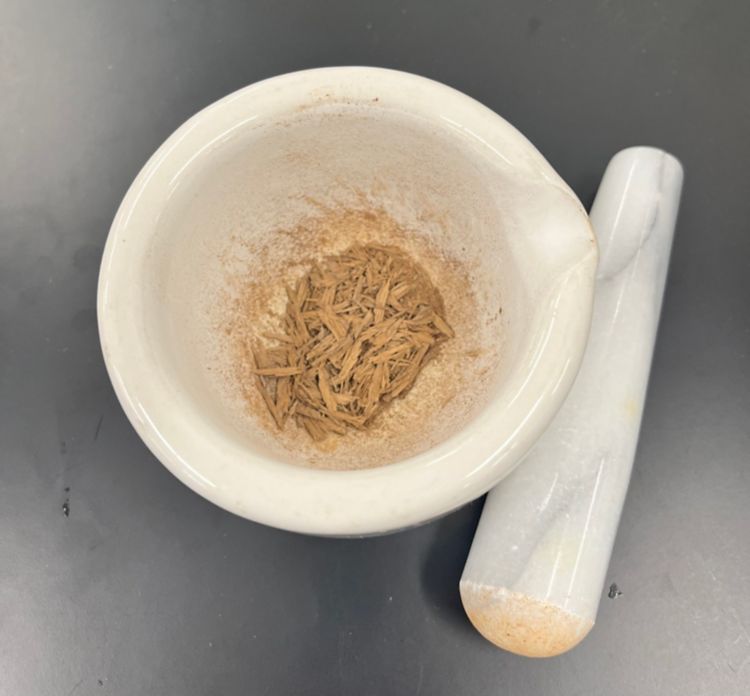 To simulate testing for the presence of DMT in suspect test samples, bark was harvested from a local plant, dried in an oven, and then ground to a rough powder using a mortar and pestle.

The resulting powder was measured out in 50 mg portions and treated with DMT to yield test samples containing 0.1%, 0.05%, 0.01%, and 0.005% mass ratios of DMT to the ground bark. After drying, each sample was placed in a glass vial with 500 μL of dichloromethane (DCM). The vials were capped, shaken for one minute, then rested for five minutes to facilitate extraction of DMT and allow the settling of the plant material from the solution.

For assays using Au NPs, care was taken to pipette 100 μL of clear extract from the top of each test sample vial to a fresh vial. DCM was removed from the sample through evaporation before 800 μL of Au NPs was introduced, and afterward the vial was capped and gently shaken. After two minutes, the vial was placed into the vial holder attachment on MIRA XTR DS for spectral acquisition (Figure 2).

For analysis using P-SERS strips, 10 μL of the DCM extract was pipetted onto the test strip, followed by 10 μL of 1 mmol/L HCl. The strip was then fully dried and placed into the SERS attachment on MIRA XTR DS for measurement.

As shown in Figure 2, dichloromethane extracts of bark samples containing 0.1% and 0.05% DMT provide a strong SERS response using Au NPs. While the response is considerably reduced at the lower concentrations tested, it is sufficiently strong for some of the peaks to provide a LOD of approximately 0.005% for the experimental conditions employed in the test simulation.

Figure 2. Signature Au NP SERS peaks from DMT can be detected very sensitively at even at 0.005 wt% (shown in orange).

With P-SERS strips, detection sensitivity is reduced but still sufficient for test samples containing higher concentrations of DMT (Figure 3). There are two arguments for the use of P-SERS strips:

Figure 3. Signature Au P-SERS peaks from DMT can be detected sensitively even at 0.1 wt% (shown in green).

DMT is among the most common drugs seized by Custom and Border Patrol (CBP) agents—it is often encountered as shipments of root bark containing high concentrations of the hallucinogen (from 0.2% to 3.8% by weight). MIRA XTR DS, used with ID Kit, is a user-friendly, on-site solution for rapid and sensitive DMT detection that can facilitate detection and seizure of illegal imports.